We care for thousands of artefacts, paintings and plants – and each one has a story to tell. Join our experts to find out what makes these items so special, and zoom in to discover new perspectives on these treasures from the past.

This gold ring from The Wernher Collection at Ranger's House showcases an outstanding feat of craftsmanship. It was collected by the 19th-century businessman Julius Wernher, who had a passion for small, unusual and richly embellished objects.

Beneath a crystal surrounded by garnets is a piece of vellum (parchment made from animal skin) inscribed in miniature with passages from the Lord’s Prayer. Probably created in the late 18th century, the ring is the product of collaboration between a goldsmith and a talented calligrapher.

The intricate craftsmanship shows that it was a high status object, owned by a wealthy patron. As a portable jewel designed to be worn on the owner’s hands – a part of the body integral to prayer – the ring was probably used in private devotion. The use of vellum also suggests the ring’s connection to earlier religious traditions – it was often used in Books of Hours, which was the standard book of popular devotion during the later Middle Ages and Renaissance.

Now on display alongside jewels spanning many European artistic traditions, the ring demonstrates the beguiling effects that English makers achieved by combining goldsmithing with pen and ink.

Sir Edwin Lutyens’s original 1919 design was for a tall pylon supporting a sarcophagus or coffin, adorned with laurel wreaths and the flags of the armed services. The permanent Cenotaph is very similar to the first, but is made of white Portland stone with subtle adjustments. His design methods were based on those of the ancient Greek architects of the Parthenon. Using these Classical proportions, all the surfaces subtly curve so that the verticals would meet at a point 1,000 feet above the ground, and the horizontals 900 feet to the side.

The design of the monument guides the eye upwards in a spiral motion: from the plinth, to the words ‘The Glorious Dead’, the flags on the sides, the dates of the war and the laurel wreaths – carved by the sculptor Francis Derwent Wood – and finally up to the sarcophagus on top. The sarcophagus is emphasised by its top-moulding which casts a shadow, and a third wreath is visible on top.

During the design process Lutyens made several sketches with variations including a figure of a fallen soldier, figures of lions and a flaming urn on top, but these were all dropped from the design. Indeed, the genius of the Cenotaph as a memorial lies in its abstraction as much as its visual perfection. With no human figure and no national or religious imagery, it can have meaning for people of all races and of all faiths – or none.

Lutyens wanted to have sculpted flags on the sides, rather than real ones, but in this one respect the government disagreed. As a result the Cenotaph is dressed with the flags of Britain’s armed services which are periodically renewed. Lutyens’s vision was of a monument that would be universal in its significance. The flags make it a national memorial, with specific military connotations. The Cenotaph can be read in both these ways – and in others.

Discover more about the Cenotaph 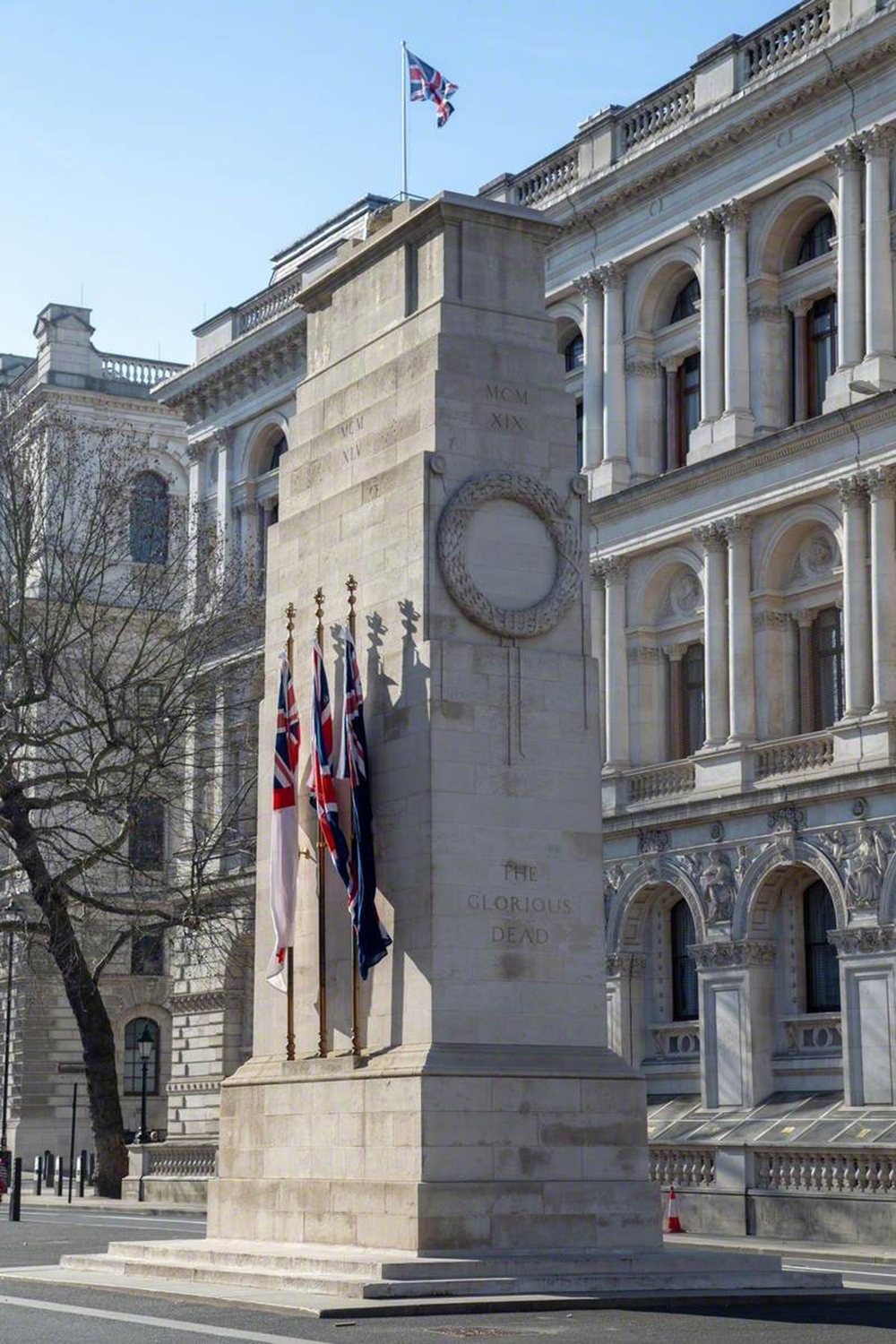 Nestled beneath mature trees at the heart of Battle Abbey are two early 19th-century reminders of the property’s time as a country house. The first is a thatched octagonal building in the Gothick style, echoing the architectural language of the medieval abbey. This is a dairy, and the stone shelves of its cool interior held the separating dishes employed in the preparation of butter, cream, curds, whey and cheese.

Just a few feet away is an ice house, built in brick with a vaulted conical chamber sunk into the hillside and covered with clay and turf. Ice collected in the winter, probably from a pond in the abbey’s park, would be stored in the brick chamber and used to cool dishes and bottles throughout the year.

The dairy was built shortly after Sir Godfrey Vassal Webster inherited Battle Abbey in 1810. It is possible that the arrival of Charlotte Adamson, married to Sir Godfrey in 1814, was the stimulus for this modest but charming building. 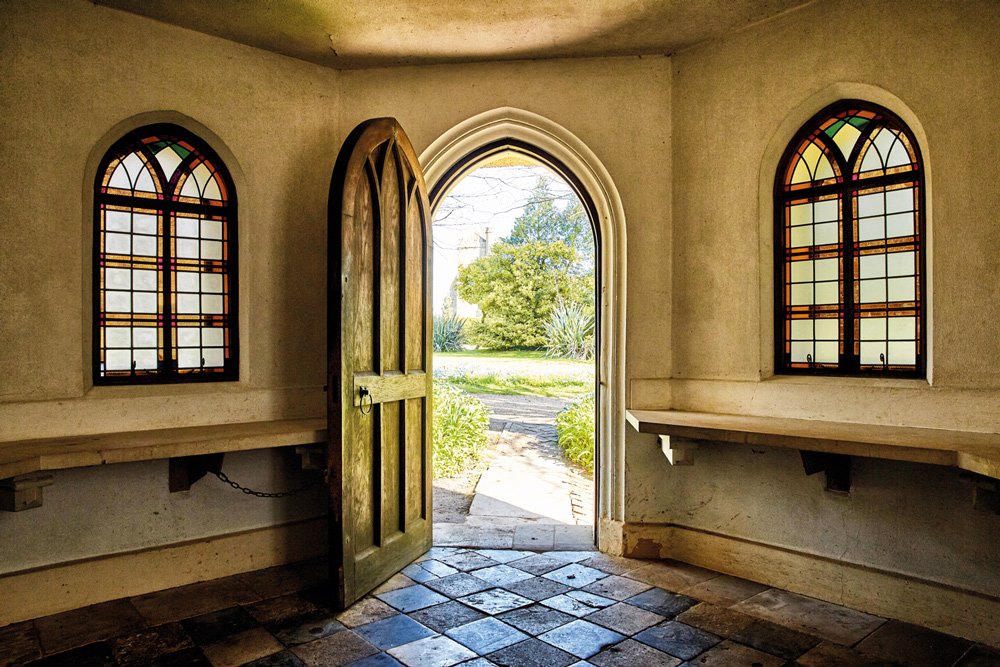 Between the 1720s and 1760s, soldiers at Berwick-upon-Tweed Barracks and Main Guard amused themselves by using candle smoke and stencils to write names and create images on the barracks’ ceilings, including buildings, women and horses. The drawings were hidden beneath later ceilings, and were only discovered during building development in the 1970s and 1980s. Following their removal and conservation treatment, some of the panels were reinstated in the exhibition area, where you can see them today, while the remainder were placed into storage. The aim of our recent work was to secure the panels in storage and allow easy access for research and handling. Each panel was carefully cleaned, lifted and packed into purpose-made boxes as protection against the open-shelf storage system at Berwick, and act as a buffer to variable temperatures and humidity. Now these fragile panels are safe and accessible, we can research the hidden stories in the drawings, which could tell us a lot about the lives of the soldiers who were based at Berwick in the 18th century. 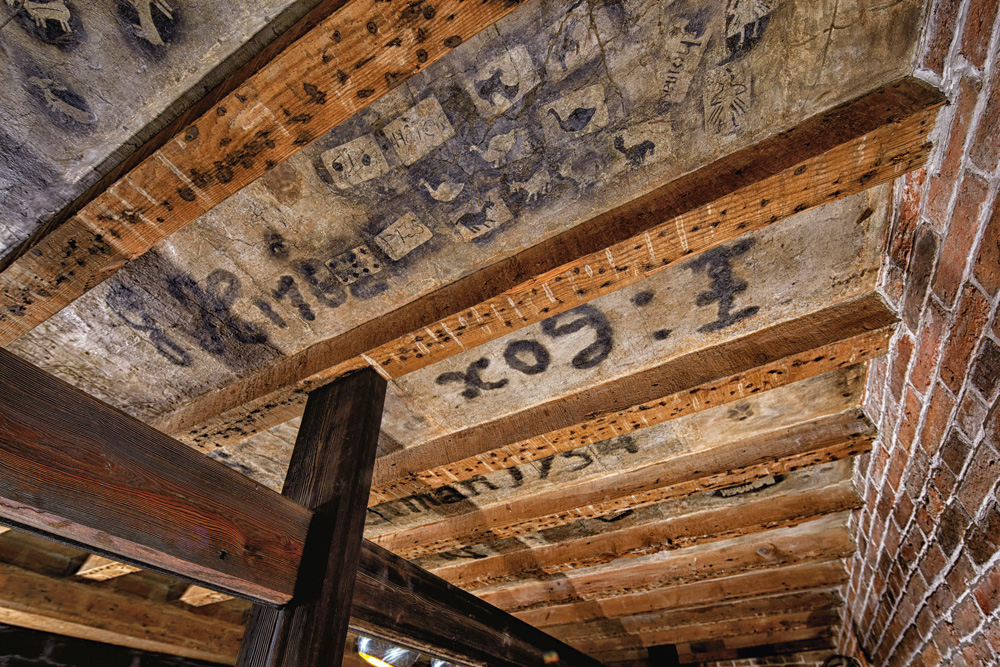 The Victorian game larder at Brodsworth Hall and Gardens in South Yorkshire is a unique octagonal structure, with a pitched zinc roof and slats to allow air to circulate around the game once hung inside. It was originally created by Charles Sabine Thellusson, who transformed Brodsworth into a Victorian gentleman’s estate during the 1860s, when driven shooting was fashionable and became the focus of the Thellussons’ social life over winter. Positioned under shady trees near to Brodsworth’s scullery and gun room, the game larder was built on raised supports, with a fine mesh between the slats to keep vermin and flies out. Inside, the game was hung on rods above a small table the head keeper used to keep records. Over the decades since its creation, the larder had fallen into disrepair and a project was launched in 2018 to install a new floor and replace missing zinc louvers and the rods used for hanging the game. Externally, a path leading to the larder has been restored, with pines, strawberry trees and box plants lining the area as shown in original period photographs. A rare horse-drawn cart used to collect and transport game also had a purpose-built trolley made to enable it to be brought out on very special occasions.

Norse invaders came to Holy Island in AD 793. This was their first significant attack in western Europe and its terrifying nature was widely reported across the continent. Neither the faith of the inhabitants nor the power of St Cuthbert, their saint, had been able to protect one of England’s holiest sites. Might this enigmatic stone, carved a few years later, record the disaster? It was almost certainly a grave marker, but its imagery of warriors with swords and axes suggests it was more than simply a memorial. On the other side are praying figures: possibly a scene of the Apocalypse. Yet perhaps the carving drew attention to Christ’s warning not to interpret every battle as a sign of the coming of the Last Judgement. As such, we may read a deeper response to the event: a symbol of defiance and resilience. This stone was seemingly lost to time, along with the original monastery. Yet the monastery was refounded in the early 12th century and visitors can now make a pilgrimage there, with the stone among the artefacts taking centre stage. 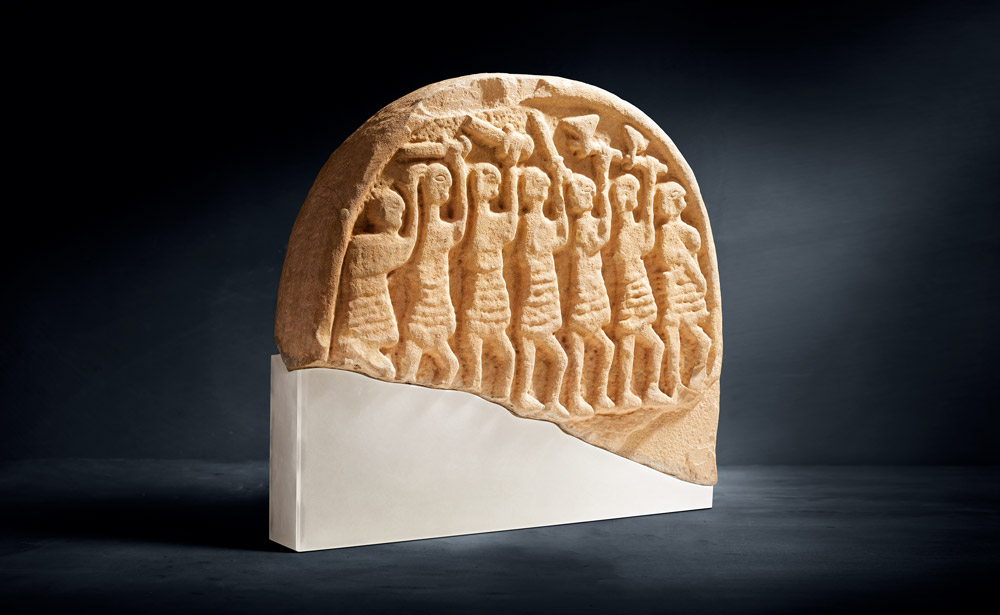 The secrets of Osborne’s chintz

The secrets of Osborne’s chintz

In the centre of Osborne, Queen Victoria and Prince Albert’s palatial holiday home on the Isle of Wight, is their bedroom. This very private room, still full of the pictures and furniture that the royal couple placed there, hides an altogether more intimate demonstration of their intensely loving relationship. The curtains and furniture covers are made of glazed cotton, known as chintz, block-printed with a design of roses and foliage. What is totally unexpected is that the design perpetuates the loving gaze of Victoria (who faces right) and Albert (who faces left) in outline profiles made up of the tendrils emerging from the flowers. These profiles can only be brought into relief by a discerning eye. In 1954 Victoria and Albert’s private rooms at Osborne were unlocked for the first time since Victoria’s death and visitors were allowed in. By the 1960s the original, 19th-century, floral chintz had deteriorated and a copy of the profile chintz was used as a suitable replacement – a very happy choice of fabric. At Osborne, in their most intimate room, Victoria and Albert still gaze lovingly at each other. 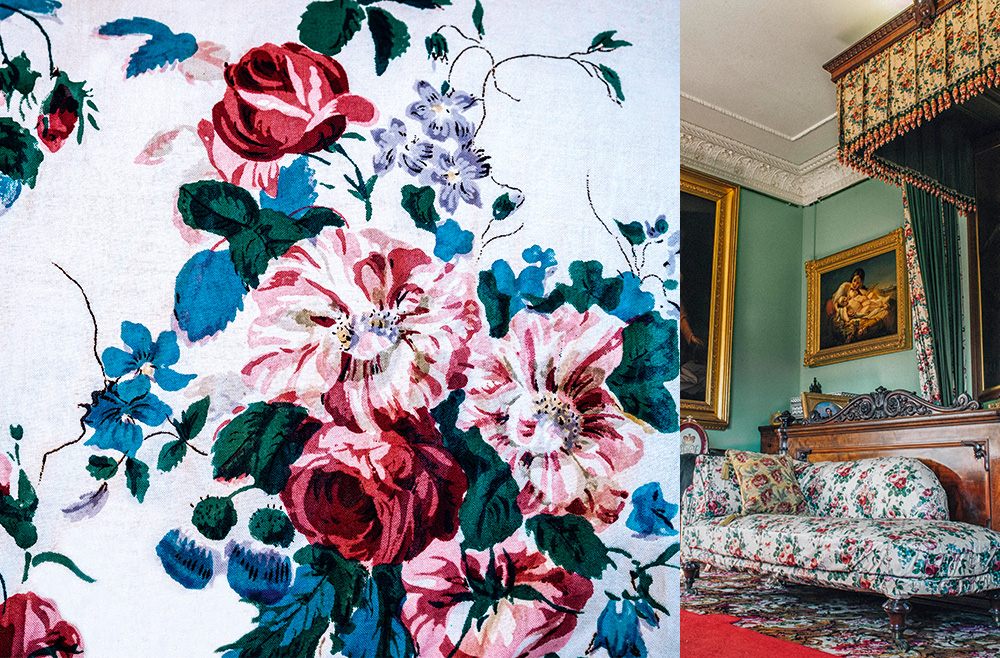 During the First World War around 3,400 conscientious objectors willingly served in the Non-Combatant Corps (NCC), a military regiment that did not carry weapons. One of these companies was based at Richmond Castle. Like all soldiers in the British army, these men wore military uniform. During the First World War, this comprised the 1905 pattern General Service khaki, badged with NCC shoulder titles and cap badge. No original NCC uniform is known to have survived – presumably because the uniform could be easily reused in other regiments, although the stigma of being a conscientious objector was probably a contributing factor as well. We have brought together original components of First World War uniforms to create what we believe is the only representation of an NCC uniform on display in the country. Joining related ephemera, the uniform is part of a brand new museum at the site, which tells the story of Richmond Castle from the Norman Conquest to the First World War. 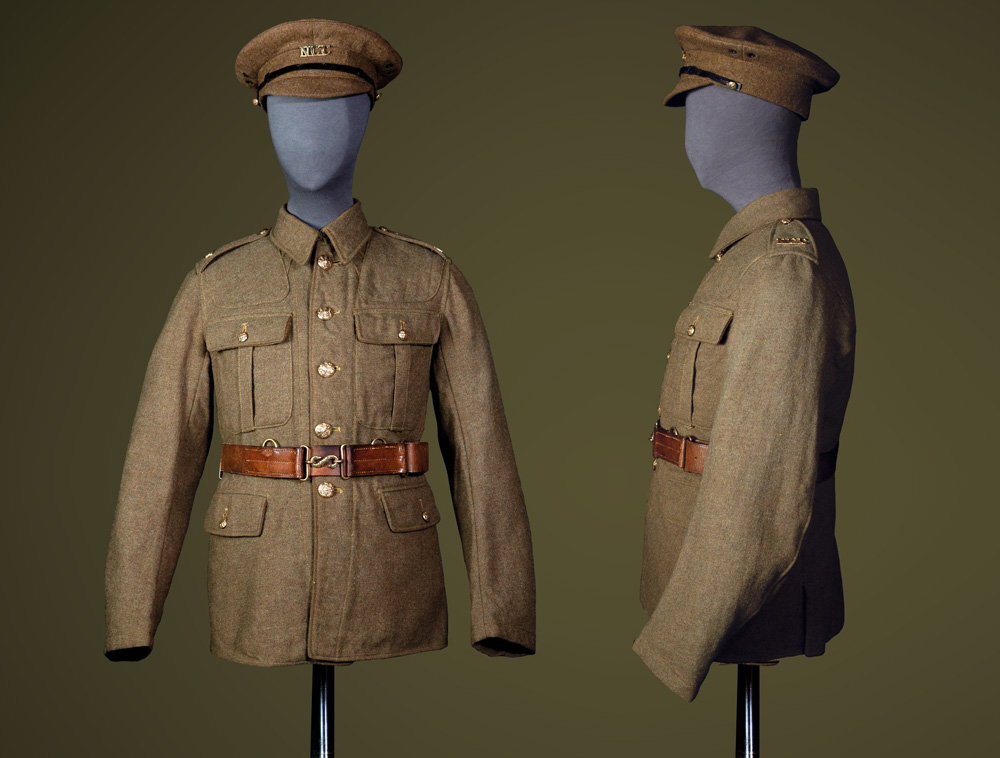 On one of the large upright sarsens at Stonehenge there is an incision of a cross (for Christopher) and the letters WREN. The inscription is thought to have been incised by 17th-century architect Sir Christopher Wren, builder of St Paul’s cathedral, although there is no direct evidence he visited. Wren (1632–1723) was born in East Knoyle in Wiltshire, some 19 miles from Stonehenge, where his father was rector of the parish. He was first educated at home before boarding at Westminster School for five years. He then went to Wadham College, Oxford, when he was just 17 and began his life as both a great architect and a true polymath. His father became Dean of Windsor when Christopher was three years old, so it’s likely Wren visited Stonehenge as an adult, possibly when conducting a survey of Salisbury Cathedral in 1668. Perhaps he, like many people, was inspired by the awe and beauty of the stones and wanted to leave his mark – something we strongly discourage today. 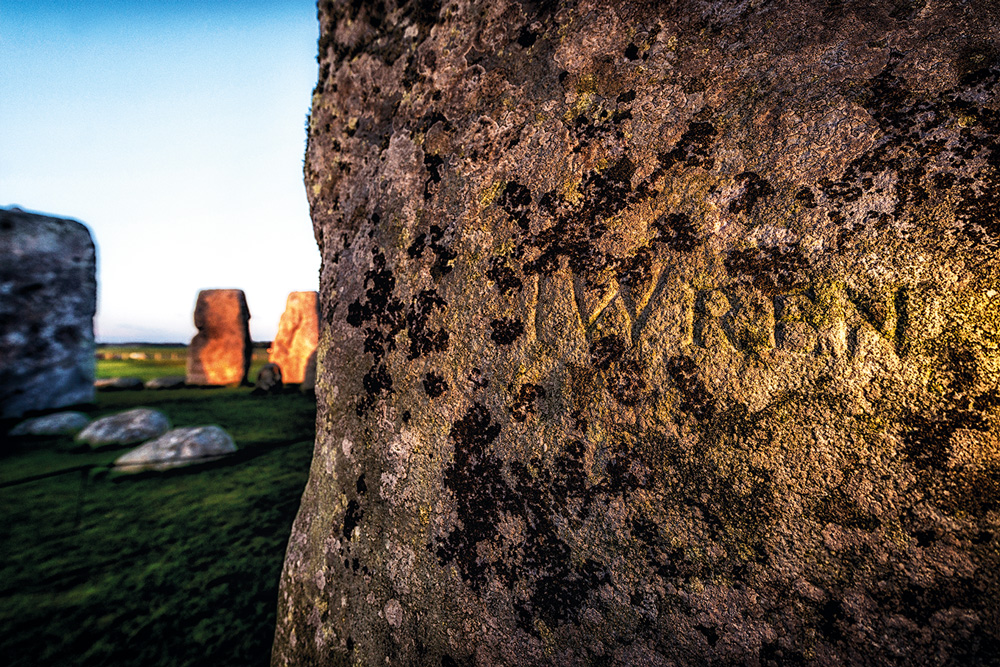 Rembrandt and Reynolds at Kenwood

Rembrandt and Reynolds at Kenwood

So famous is Rembrandt’s self-portrait, so frequently reproduced, that many visitors to Kenwood don’t believe it’s real. Its curly gilt frame is very different from the sober one that would have surrounded the picture in Rembrandt’s time but, typical of 18th-century French taste, it hints at the important collection it belonged to a century later.

Look upwards and you’ll see another self-portrait, by the great 18th-century English painter Sir Joshua Reynolds. No doubt Reynolds would have been flattered to share a wall with Rembrandt, whose work he admired. This thought was not lost on the paintings’ 20th-century owner, Edward Cecil Guinness, 1st Earl of Iveagh, who hung them in close proximity in his townhouse, before bequeathing them, along with 61 other exquisite paintings and Kenwood itself, to the nation.